I wish I could refrain from speaking of the beauty of the sun setting in the Mekong. It is however impossible, because my daily recognition of how much it changes and how much it is the same sets the pace of my own moods.

Now I no longer travel places, I rather travel people, and that is why I am here. And many people travel to visit me here. Last time I was in Thailand I met dozens of unforgettable people; about some of them I have extensively talked, like Carley, who is also planning a visit soon, but today I want to talk about Ella, or Arunee, as she’s called in Thai. 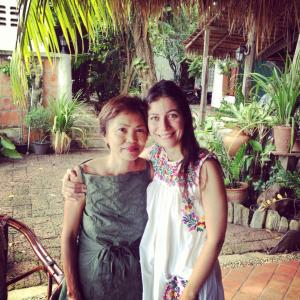 I met Ella years ago, and we struck an immediate friendship beyond differences of culture, religion and age. She took a train from Bangkok and I waited for her arrival at 5:30am, even though she had expressed her wish that I should sleep. “I am 69 and I ll arrive early and I must rest”, she said.

I agreed, but knowing she could not check in so early I waited for her nonetheless. We’ve met several times here, and every time she would come with a different child or grandchild. Once she told me the story of her father, who asked her to build him a Mausoleum, and how she had travelled all the way to Greece to visit the Oracle of Delphos. She thought that it was absurd to spend so much money on a mausoleum, but came to understand in Greece that all that her father wanted was to be remembered. She also wrote a book about his life.

So, this time, I was here anxiously waiting for this wise lady who once noticed my fragility and told me to go home when my journey was evidently over. She arrived, we hugged, I let her rest and later on the same day I told her all that I had to tell…. and then we went out to see the sun set. 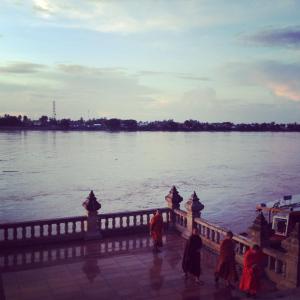 Her mother is now 95, and she spent her youth in a Shanghai that was modern, cosmopolitan, vibrating and full of intrigue. Her mother was known for her beauty; she used to to be invited to every wedding as a bridesmaid, and she was usually more beautiful than the bride herself. She had no formal education but soon got a job as a secretary, and she hoped to get married to a rich man and have a good life.

She did not want to marry a Chinese man, though, not even an European, she wanted to marry an American. In the view of the Chinese, Europeans – and not just the Brits – had destroyed China with their opium wars. She thought that the Americans were very different.

Japan had already started its wars of expansion, and Jayne (her English name) wanted to marry a Flying Tiger pilot. These adventurers were, however, not exactly the free agents people wanted to believe they were, they were actually American mercenaries that flew for China.

Shaghai was at that time a very vibrant city, parties took place everywhere. And one day Jayne heard about Tom. He was a pilot. He was charming. Everybody was his friend, and every woman adored him. Tom, just like Jayne, had a western name but was actually from Siam (Thailand). He was one of the locals who worked for the Flying Tigers. Jayne was naturally interested in Tom, though actually more intrigued than in love. Tom was dazzling but had no money, so he used to say “girl, i ll take you out, ok… if I have my salary we ll go dutch (meaning we share the bill), but if i have no money you’ll have to pay.” Couldn’t be any more rare in China of the 30s , could it?

Meanwhile, the situation in Asia was quicky deteriorating. War broke in Europe, Japan expanded more and more. And Jayne, thanks to her incredible beauty, had more and more proposals of marriage. Rich Chinese men could get her silk stockings even during worst of the war, but she had set her mind that she would marry Tom; she knew that, if he had the chance, he would provide her a good life.

With Chiang Kai Shek running to Formosa (the later Taiwan), Jayne made her mind and decided she would go to Siam. But by now she was a beautiful Chinese woman already used to the finest things and treats, in spite of her humble family origins (Jayne in fact had very little), but simply because of the bright world of the Middle Kingdom (which is what China means) she was able to enter because of her beauty. So going to backwards Siam was nothing short of a devastating blow for Jayne. But the world was changing and so she did.

When she arrived in Siam she found out that Tom’s family lived not just outside of Bangkok, but in a small province, in a country town. Jayne was miserable. Accustomed to be in the middle of the world, she was now living with a family of country joes who chewed betel nut. Real barbarians, she thought. Tom at least was quite sensitive to it, and soon moved to Bangkok.

Bangkok was just as horrible to her. Ella recites this to me like a poem, it comes out from her book. And now she stops, takes a long look at the river and says that she has to assure to me that her father was very competent. In his early 30s he was a manager in a bank. And though Jayne hated life in Siam she eventually had babies. At a certain point, however, it was just too much for her, and she left everyone and everything for Hong Kong. But she had no formal education, and Hong Kong was not Shanghai. Soon she was back.

“As I grew up I barely saw my father. At the time of his death he owned 50 companies. He had built a vast empire. As a child, I already knew that three out of every 10 articles produced in the whole country came from my father’s enterprises.” But this is the story of Jayne, not of Tom.

“Jayne travelled the world with my father, and she fell so much in love with the idea of supermarkets that when she came back she opened the first supermarket in Thailand. She made a life, she had friends, yet she was not happy. So she moved to the US. It didn’t make things better.”

When Ella decided to write her  life, and asked her mother if it was ok to do it, she didn’t like it and gave no permission. Ella didn’t give up, she believed that she owed it to herself and her offspring. One day she came back to her mother and tried once more.

“Mom, father has been dead for more than 20 years, you are the matriarch of an Empire, wouldn’t you like to visit Shanghai?”

She looked at me for a very long time in silence, and then she said:

“There is no safer place than Siam.”

Then she stayed silent again, and I waited. And then she said

“There is no better place to live than Bangkok”

I expected her to expand. She never did, and I understood that at 95 there is very few things you actually care to think.”

On my part, I was just thinking that whatever mysteries the world have reserved for Siam, and Brazil, Ella and I were both blessed for living in countries that have no recent memories of war. Looking at Laos, on the other side of the river, and thinking of old Indochine, China, Vietnam, Burma, I suddenly felt an everlasting peace here, sharing the same silence that Jayne kept when offered to go back to the past. I was present, and I felt home. Because home, dear Ella, is an encounter. A place you feel safe.