Today is my total laziness day. It is not because I am sick, nor tired, nor is the weather bad. It is because after 19 km walking in the mountains of Kalaw with my great guide Kimanjê . Not only I knew lots about his life but He told me he was going to another city with his uncle.

I guess I have been writing so much in Portuguese, that I have to make a huge summary. For those who have read me you all know about Mr Win.

Mr. Win took me to the botanical garden of Pwin Oollwim. I chose to go in the local way and thanks to Mr Win not only he did this but I learned a lot about his life and about Burma or Myanmar.

It goes a bit like this. Mr win’s father worked for the British and he learned English when he was 4. His life became way more complex after the British left in 48.

Myanmar was called Burma since the mid 19th century till 1988. In 1947 the General Aung San was killed and in 1948 the British left. In 1988 the Junta took power and changed the name of the country.

There many different cultures here more than 100. In 2011 there was an election which elected the General Thein Sein from the Junta to become president.

According to Mr Win, actually all of this part is according to him. They changed colour , in other words from official Military government to fake democracy. No one believed it.

Finally in 2016 the new election put Tink Yaw into presidency. He is the son of a famous writer and is from the party of Su Chi. Su Chi is in International relations now.

So I am in a country where many people are very happy. Mr Win says it is a young democracy and he believes disbelieving.
I absolutely adore Mr Win. I not only met him by total luck but I ate with him and his students in the street for 2 days. I learned how to eat with my hands, I spoked to his students in micro words about Messi and Neymar 🙂 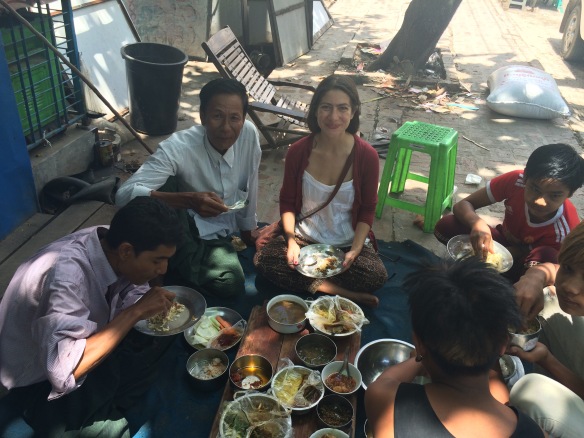 On the third day he came with me to the botanic garden. And though he now lives in a monastery and teaches everybody he has little money. He never charged me to take me. He just agreed for me to pay food and transport. And everyday I think I should have insisted more.

I took a bus to Kalaw and here I hired Kimanhê ( my spelling). He was a young boy. I am always optimistic. Yesterday we had a marvellous day walking the mountains. We walked from 8:30 to 4:30. I was never even tired.

It was the two of us and wow I learned even more. This boy who was so modest at first is actually in the fourth year of law school. He knew so much about politics, the plants, about anything really.

So his initial scepticism about the government has foundation. He told me about the conflicts there are in the border of Bangladesh.

I wonder sometimes how is it that some people believe we are very different. So much similarity and difference there is even inside one family. Just imagine in the world.

We spoke in the middle of midst, and fog and it was wonderful. So green, so much talk, so much I learned of the Burmese language.

He explained that now phones are accessible to all but Internet is expensive. They use it a lot in games. I was sad to know that he would not be here but he told me where to go, how to dress. So I went to the other agency and bought for 2 days later. I never knew I would wake up so well today.

I open the curtains and is sunny. It is 6 am. I go down and see the Junta in the streets. I walk to the agency but it is too early. I walk a while and then return to have breakfast.

In my lovely hotel I have now friends from Singapore and a mysterious family of a Japanese men, and 3 Burmese girls. The lovely lady told me she does not speak Japanese. And the man does not speak Burmese or English. The children did. When I see this meals of 4 people who cannot speak to each other my eternal thought that language is not that fundamental brings me joy.

The lovely girl from Singapore tells me I should not walk today. I should go to a Spa. She even tells me she thought about me last night. How could I go out of a hospital, fly to Asia and climb a mountain.

She was so cute. I told her not to be worried. I was not. But I did take her advice seriously. Why not. It is already booked for tomorrow. The rain never displeased me. Let’s find out what a spa is like.
All that I have to say is that I love Asia.