So I will refrain from talking about the elections in my country to tell a small story that happened these days when I went for my typical saturday lunch with my grandmother and both the story and the reaction towards it taught me a lot.

It was suddenly summer here! I ordered tea thinking of the people from the desert and Asia that had told me to not drink anything to cold in the heat. And my 90 year old grandmother ordered her caipirinha. ( lemon, ice and either cachaca, vodka or sometimes sake.)

After the natural confusion of bringing alcohol to me and tea to my grandma, I decided to go to the toilet to wash my hands touched by the lemon of her drink.

I went up and I saw a little boy. I did not say anything when I went in, but as I came out, he was still there standing by the stairs.

“What are you doing? Are you hiding?”
I said jokingly

Quietly, he said no.

I was intrigued and wondering what could he could possibly be doing so quietly and alone in the empty second floor.

“Ok. I am just here. Not playing, not hiding. I am waiting.”

“Oh. I see, you are waiting for someone who is inside.”

“No. I am waiting to see how long it will take for my mother to notice that I have disappeared. I don’t think she misses me.”

I was so taken aback by these words. He was literally in silence for a long time.

“What is your name?. How old are you ? I think you are 7. And I am sure that your mom thinks either you are in the bathroom or playing. I am 100% certain she is letting you play. Who is she with?”

“Pedro. You are right I am 7. But you are wrong she is with her girlfriend and she forgot I exist.”

I still talked to him for a while. Sweet boy as hell. And went down to look for his mother and her friend.

“Excuse me, are one of you Pedro’s mother.?”

“Oh my god, yes did he do something wrong, anything to you?”

“No. He is lovely. But he has been there for a while waiting to see if you have noticed he has disappeared. I would encourage you to go find him and say you have been missing him.”

She was completely taken back by these words, she thanked me, told me she had no idea, and went after him.

I told my grandmother about it, and she said:

“This goes to show how hard it is to be a parent. How much abandonment a little child can feel. And shows why it is not surprising they later become closer to their nannies than to their mothers. Poor boy, poor mother.”

They came to say goodbye when they left.

I told this story to a few people. Some people immediately thought about the child, some others went as far as saying

“Poor mother she also has her own life.”

The capacity to put your own life before a little child’s, one’s child, shocks me.

And so I remembered a phrase I heard these days

Little stories teach you profound things about how to react towards the world. In election time or not.

Ps: as I just read this story to my grandma she said:

“It is way worse for the child. Who is a child. Who feels it strongly, and might in a few years not remember about it consciously, but it will be there and later on they will become the most severe judges of their own parents.” 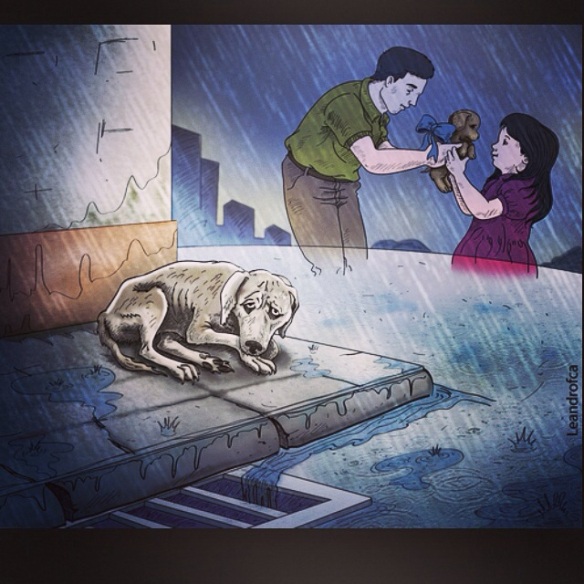