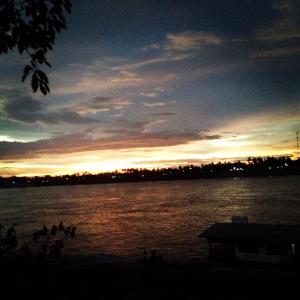 A Japanese man asks me to look at his tablet. I am not sure what he needs. I look at the tablet, it is in a language I can’t really decipher. Russian, maybe. In our broken English spiced with loads of Japanese I understand he needs help with the Russian but I cannot help because I don’t know any Russian; with google-translate I tell him I will find someone who can!

Oh Yes. I am in Asia. And just as I am having breakfast in front of my beloved Mekong I feel so in place that this stranger comes to me as if I still worked here. Being in Mut Mee again… some part of me feels I never left, the rest is pure joy.

I arrived last night. It was a hurried journey. In Portugal we drove fast to the airport and this always-so-punctual-lady almost missed my flight in Lisbon. I had then many hours to wait at Istanbul airport, but I got so entertained by the white robes of the men and women in colourful veils that I almost missed my flight again. Ramadan had just started and my mind flew to my previous Ramadans, the last one in Palestine, and before that in Kashmir; then my mind flew to Ericeira, in Portugal as I had just left the house of Joana and Faisca, a couple I met in Mut Mee a year ago and who now hosted me lavishly in my last week in Portugal.

I had planned it so much, so many times, that only when I was inside the flight to Bagkok did I believe I was really going back to Asia. Now I was in a real plane that was flying in the right direction, there was no more chance not to arrive.

As I landed in Bangkok I found out I had only 2 hours between landing and my next flight to Udon Thani. And had I not rushed enough I wouldn’t be told in time that my next flight would leave from somewhere else. There was no way I could do it. But just as I was taken care when I left Thailand with a broken leg last year, now I was welcomed by people walking the extra mile to make me not miss my last flight. I had less than two hours to find a cab, negotiate the 1-hour drive and arrive safe and in due time at the gate. Miracles sometimes happen, and after jolly 28 hours from door to garden I landed at Mut Mee just in time to see the sun bathe the Mekong with more colours than my poor jetlagged mind could imagine.

All along this rush I could only mentalize that I’d drop my bags, say hi to the ladies in the kitchen and then treat myself with a massage. I just forgot the black-hole power of Mut Mee, or its whirlwind. As soon as I dropped my bag down I saw Pancho, the Yoga teacher. There would also be some more people; in the kitchen Yong hugged me and said I was too skinny. More hugs all over and then of course I cried and they told me to eat. They made me my favourite tropical Muesli. 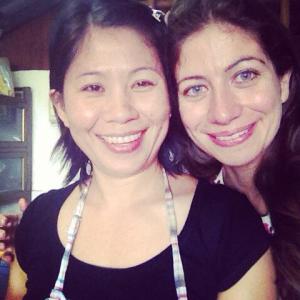 Then I made the fatal mistake that would keep me apart from my so-yearned massage for some time. I sat under the straw huts and within seconds there were loads of old friends showing up, or falling from the trees. And then I had flowers in my hand, and inside the flowers there was a letter. Edu, from Switzerland, got here before me to say welcome. Other hands brought me the flowers, but the letter was his calligraphy. He was here, too. It took me a while to grasp it. And the sun was just as beautiful as always. I was home. With flowers and friends. Massage can wait.

And then people keep asking about my book, and it is circulating, but Julian took his copy with him in a trip before Petra and Simeon could finish; they had been reading it aloud to each other every night. So I went to get my last copy to lend it to Simeon. And time flew and I met Kevin who was here to work with Justin. Kevin wanted to speak Portuguese, he is also fluent in other 17 languages, including Sanskrit, Hindi and you name it. Then came Pao, Aye, Mark… the night went on. 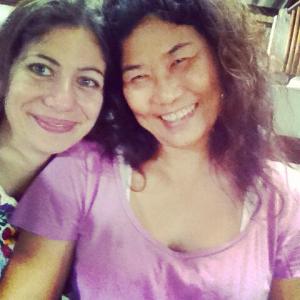 It wouldn’t be in the morning that I would get my massage, even though that was my first decision when I got out of bed. I had to say hello to the ladies in the kitchen of the morning shift. The ones who took care of me sooo much when I broke my foot here… and I cried some more. 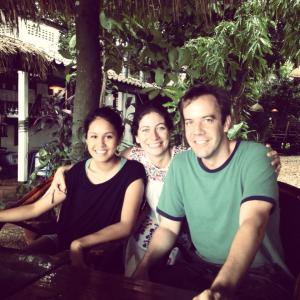 Then came Justin, working in some Genome decoding. We sat and he fixed the Russian computer for the Japanese. The man was very thankful. 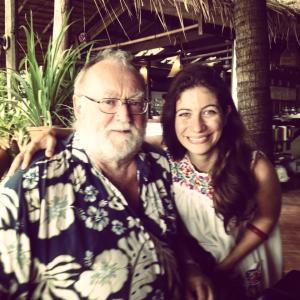 Then came big Don, the Air Marshal from Australia who lives in Thailand. I wanted to show him something I’d brought, my precious gift, but on the way to my room I was stopped by a lady who told me I would not remember her. I did. She is Do Re Mi, the Israeli I met here before I went to Israel. She is a political activist who set the pacifist Uri Avnery’s webite. Moved to Thailand and wrote the only Thai Culinary book in Hebrew that exists. She used to have a column in some media called sex drugs and rock’n roll, too. She stopped me, but I was speedy. I started telling her about my book, but I had no copy to show. She told me to calm down.

She will be back and I will be here too. That is the thing. She then left, she had cooking classes to give, she has a life here. I realised that all my friends here are locals; they are Thai or farang (foreigners) living in Thailand, they are not travellers somewhere. That’s why coming back here feels like home because it is not going back to an old holiday, but to a home someplace in time. Or sometime in place. Whatever… now I have so many homes… I am just happy.

And then I got my precious gift.

See, while in Italy I met my dear friend Francesco, who had once come to Mut Mee because of me. I even introduced him to my parents, and Francesco brought me a bottle of homemade olive oil from the South of Italy. I carried it all the way down because I know how precious it is here. It’s for Julian, but he’s still away and it’s burning in my backpack. I show it to Don and we decide we’ll prepare some special bread with olive oil for a dinner to celebrate this relic. We just have to save some for Julian… for Julian also knows Francesco well.

Julian wrote me to take care of Francesco once he left Mut Mee. I wrote Francesco the same to show him people care about people all over the world. Care from Julian in Thailand to me in Brazil to Francesco in Italy, where he is a brilliant doctor who took care of me from the day I went to the Hospital and then wrote me every single day. It was great to meet him with his girlfriend and my parents, a very familiar vibe.

So, Francesco, this is for you: your olive oil is worth more than gold here! And we are going to celebrate your friendship everywhere in the world.

So it is 3 pm; I woke up at 7, came to this table and have yet to stand up to leave it. It’s heavy exercise. I can’t move from where I am, from this joy, from inside my love for the Mekong, for Mut Mee, my little house in Asia.

But now I must go, definitely, before someone else shows up. After all, there’s still some serious business to do: my massage. 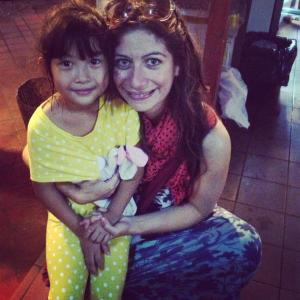