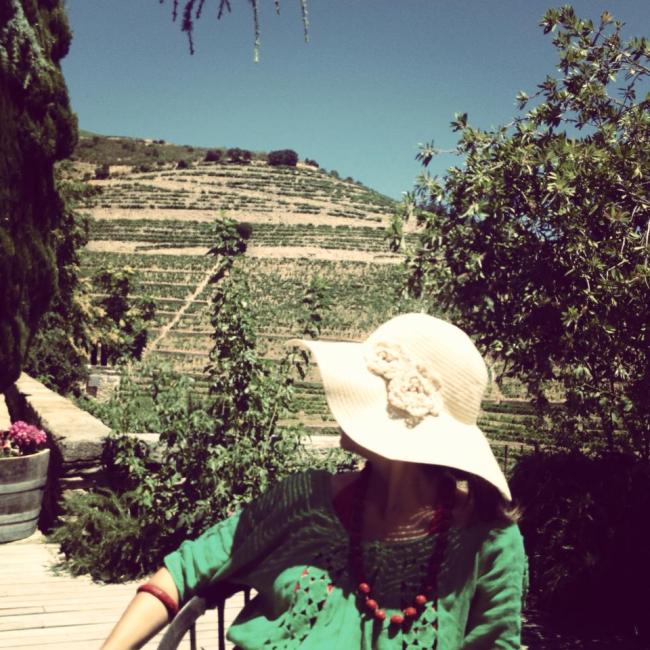 We woke up at 6 am so as not to run the risk of being too typically Brazilian (meaning: always late). We were to meet Jorge, the owner of the restaurant that has delighted us in the last few days. He invited us for a day-off up the River Douro to visit the vineyard country, the real home of Porto wine (among other very fine wines, of course).

We arrived before 9 at the station, amazed with our own punctuality. I wonder how Swiss Edu has become, and how British I have. I guess that in my case it comes from my Grandma who is always ahead of time; nothing annoys her more than letting people wait for her.

Jorge came punctually, too, and laid down his plans for the day. He was not able to arrange something with a specific Quinta (a little farm) whose wine he usually buys for his restaurant. But we should take the train all the way to Pinhão anyway, and see what we could manage from there. 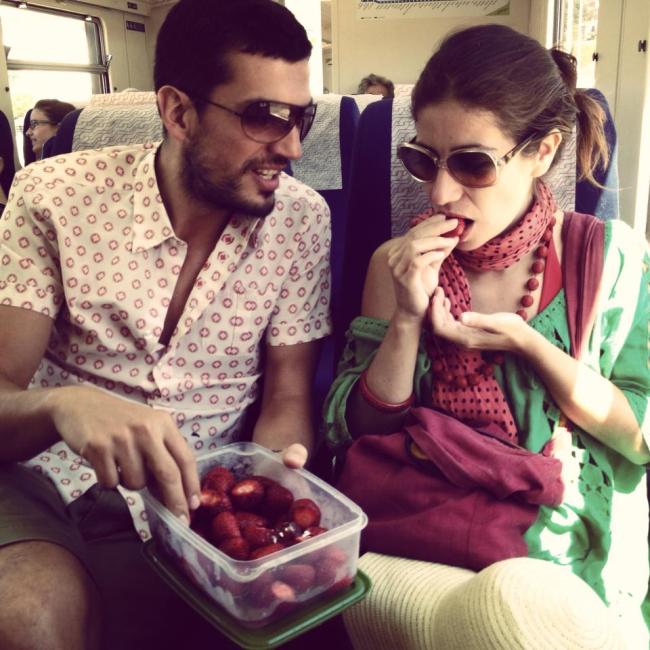 So we set off, with no plans at all. We didn’t mind, we had already spent an evening with Jorge, he had told us that he was just back from 8 months traveling in India and Thailand; that he is married to a Brazilian and had visited Brazil several times. As Edu put it, after a certain time traveling the world we no longer travel places but rather people. Friends set the routes, people to reencounter define the way. That’s why we didn’t mind whatever we would do in the day, the real gift was knowing more about Jorge, telling him about us, striking a friendship, a bond, for new travels in the future.

It was anyway a beautiful train journey following the Rio Douro. We talked about life, economics (the Portuguese government is at the verge of total collapse), the situation of Brazil and Portugal, in some ways so similar. We share a very dumb political culture and a whole set of wrong models.  Jorge: “Brazil is trying to change things, to educate the people with laws, top-down, but this is no evolution, no education, it’s simply imposition.”

In Brazil there are also many jokes with the Portuguese in the uncomfortable role of the dumb ass. Much like the Belgians for the French, Austrians for Germans etc. We talked about that, too, wondering if there was some kind of mutual perception that led us to it, apart from simple prejudice or an atavic anticolonial feeling. I thought at first that maybe  people here were way more literal when in a conversation, i.e., not developing much beyond what was asked. In a brief research in my mind I realised this seemed to be the case everywhere. In every single place I have been, there are always some people who anticipate problems and offer different answers, while some other people are just plain literal. Anyway I just felt ashamed by the thousands of jokes I have heard in Brazil. 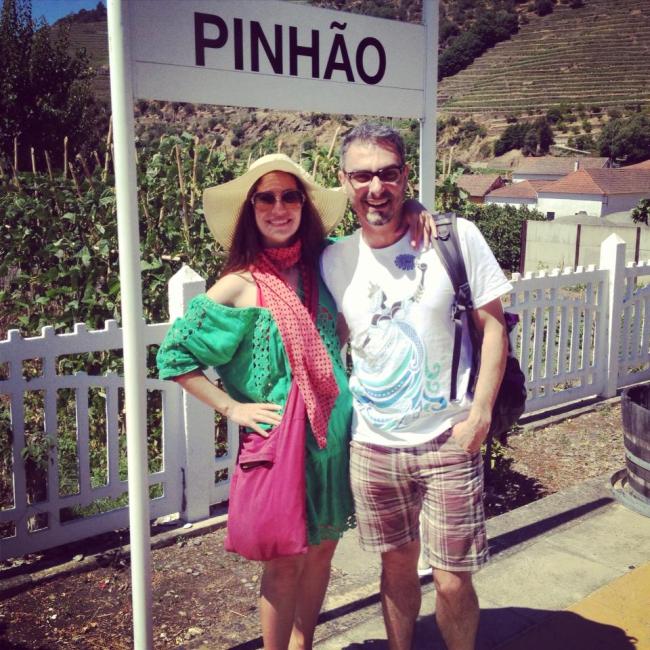 And then we reached Pinhão, and we walked under a blasting sun until Jorge made some magic and arranged a private journey for the 3 of us. We ended up taking a boat down river Douro. Valdemar, the sailor, a man in his 50s who had never been to school, tells me that he feels very sad for his 13-year-old son when he sees him spending his whole time in front of a computer. He’s missing the world, he says. He puts himself in a compartment where all he chooses is similarity. Valdemar then told me about the fossils and cave paintings that were found in the region and that had put many historical theories in check. And then he told me how he loved the river, and most of all meeting people. I asked him who where the people that most intrigues him, he said it is the Israelis.

Holy Jesus, I thought… no, not here…! Could it possibly be that even in a boat in north Portugal I would have another round of Palestine/Israel discussions with a boat man who had not been too much in school? But I couldn’t help myself, I had to ask why.

“They are very friendly, you know, but there is a sadness that they all seem to carry. I don’t know where it comes from. I noticed this sadness once in a family I first met, it was present in every member. I first thought the family had some kind of terrible story in their life, but then I met other Israelis and the same sadness was there. It is not explicit, in the open… it’s just some kind of saddness mixed with fear in their heart.” 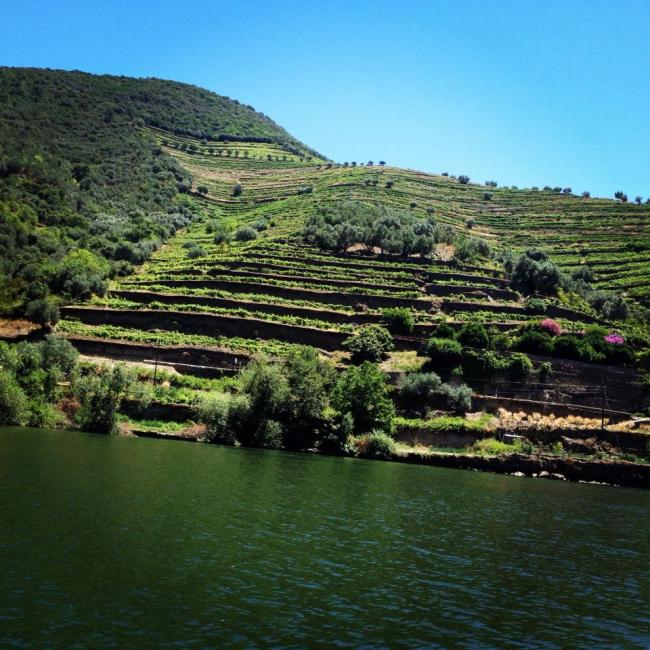 The talk didn’t go further, though. Before I could ask more, Jorge called me to see the wine terraces and the topography of the area. Green terraces, old manor houses, it seems people here are self suficient and they plant and grow all they eat. 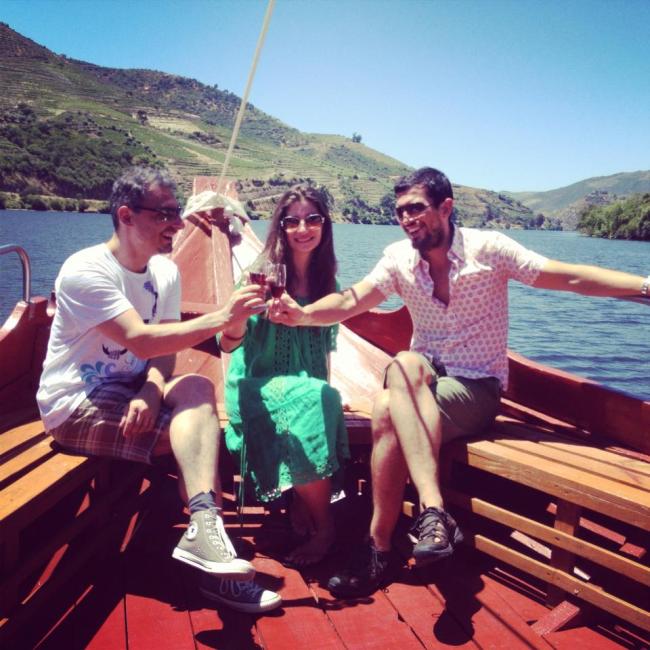 We eventually reached our destination about an hour later. A friendly Portuguese lady took us to Quinta Nova, a vineyard owned by one of the richest families in Portugal (Amorim) that also has a restaurant and hotel. We had the most amazing food; a special fig dish started the feast, which was flooded by wonderful wine and ended with an orange pudding and, of course, Porto wine.

If that had not been enough, we were still offered to enjoy the swimming pool. It lays on the same level as the vine terraces in a fake horizon, and the sun was inclement. We swam, laughed and talked while contemplating the vineyards and the Rio Douro all the way down. 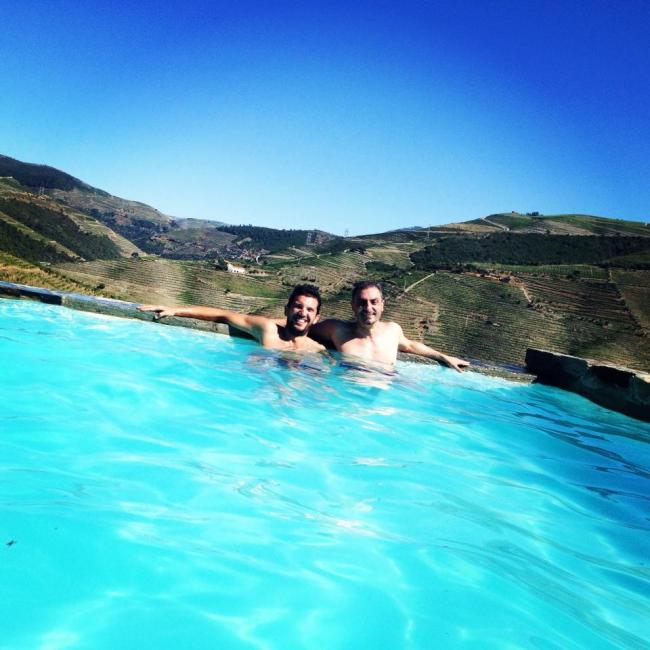 I was so thankful to Jorge that I could not even explain. He told that it was not common to invite strangers like this to go out and spend the day together on their free day. “The Portuguese are reserved people, and I was afraid I scared you off, but then, we had connected so much.”

what we saw from the pool… 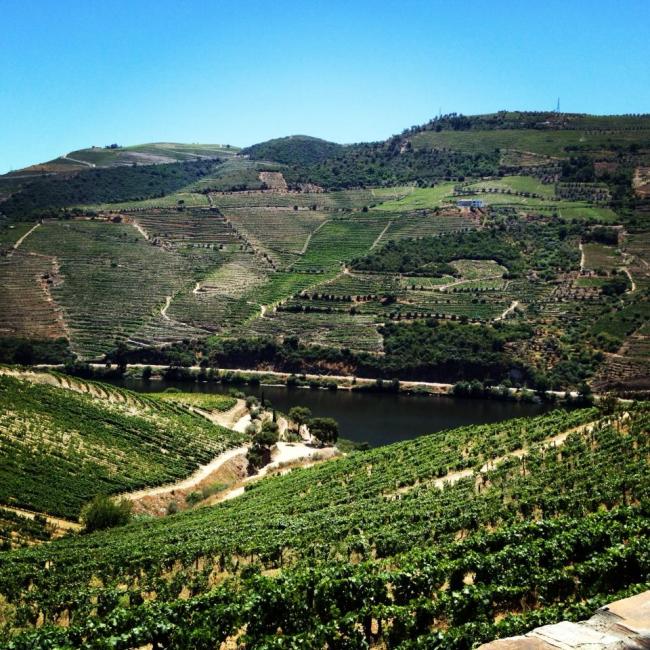 It is true. O Caçula, Jorge’s restaurant, is a jewel we found by total chance. I had never imagined we would make a friend in Porto in such a short visit.

And now, as Edu is packing his bags to go to Switzerland and I make my way to Lisbon I feel my heart tighten. But it is ok. I have felt that before, it is that painful feeling that anticipates Saudade.

And it is also the feeling you often get when you are in the right track. When you know in every cell of your bone that your departure affects you and the others you are leaving, and that you will always think back at that time with joy and happiness; the pain comes from  our inablity to accept that we must keep walking just a few more steps till you re-encounter those you once left.