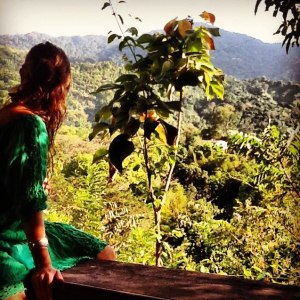 My feminine nomad soul comes through generations. My mother loves traveling. She made sure that I was educated in several languages so that I could be raised for the world. My grandmother in her trips, which started early on, always learned something from the people.  Nowadays I learned from her to appreciate something that is handmade.

I never bought anything. I always traveled hearing stories but markets were for me just to see people. I heard stories of carpets in Morocco and I never wanted to have one. I never had anywhere to put it.

So in Colombia I decided I would find myself something to bring home. I did not know it. I did not look for it. And one day I was walking Taganga, a village who became more mine because of my Gazan friend Yassert, and Yuhhi who is Guajira descendent and who I talked to every breakfast. And for the music of Alejandro who looked like a blue phase painting of Picasso, and for Joselito who told me the stories of people and introduced me to my guide and friend Eliecer.

So when I bid farewell to taganga it made me cry. I sat in Yasssert’s place.  Eliecer had just come the night before all the way from his village with his wife Tati, and his 4 year old son Christian to say goodbye. I thanked them, I played with the child and I knew I had some dear Colombian friends.

Then the following morning I walked down the mountain to say goodbye to Joselito, to buy him a juice because I know how much beer he takes everyday. I searched for Alejandro and did not see him. And I went to have my last breakfast in Bansai. It was hot and I had a long sleeve shirt. I asked Yuhi if it was ok for me to be in my Bikini inside her place or disrespectful.

She looked at the tourists in Bikini, looked at me and said. It is ok for them, but not for you. I knew in her sentence she knew I cared what was respectful to her. She took me to be from the people who care. And I kept my blouse on.

I cried when I was about to go. I love this people. I love this place. Yassert tells me Brasil is next door. I should not cry in front of his child. I tell him I cry of happiness.

And I walk back to our guest house called Techos Azules. Blue ceilings. And in South America to be Blue is to be happy. Or at least in Brasil it is. I always wondered why in English to be blue was sad.

I felt both feelings. And I decided that for me, blue is all there was about being… in true contact with feelings. To me now to be blue is to be fully human.

And then as I walked I saw some artwork. I sat to look at it. And Nathalia the artist told me the story of it all. Most of them were made of White Clay, but my favorite piece was made of Brown clay, which was made in  province called Chamba Colina. She had walked peoples houses to find these pieces. And she painted them.

She looked under beds, and behind wardrobes and she found this viniera. A viniera is a bottle for people to drink Chicha or whatever brew that comes from the earth.

She painted a pointilist style, which she explained to me she learned from the Australian Aborigines. And the painting was a praise to the carribean. I looked at it… and I knew that was my first ever bought piece of art. I sat with nathalia who was interested to know who was taking something that was more precious than the rest. I told her I learned it with my grandmother, and my mother to value that which is made by hand.

And suddenly I realized that I learned through my life to value artistic culture as the best manifestation of humanity.  That piece of art carried the story of tradition, of Colombia and the celebration of nature, and the art that is manifested everywhere.

I bought it and I showed to everybody I could.  And I carry it as my precious treasure. And then I said goodbye to Taganga carrying a piece of art, friends in  my heart, the feeling of saudade ( the brazilian word that is a nostalgic feeling of the past wishing for the future). I left feeling Blue in Portuguese and in English.

And I came to Minca. A village in the foothills of the Sierra Nevada. A mountain range by the Caribbean that reaches 5,700 meters. And I ended up in a Hotel that has a truly Gabriel Garcia Marquez touch to it.

It was not the first place I was in. But it is the place I take with me. Here I met Claudia, a Colombian lady from Bogota who is a psychologist and has worked in Brasil and who could recognize my little Viniera for what it was. A treasure! As I walked this place I thought it might have been an old colonial farm house of coffee… but she told me it was a Convent till the 1930’s.

And that it was said here that the main nun had fallen in love with the priest, it was a huge scandal in the land where “Love in the time of Cholera” was written. This nun helped the community a lot because she felt guilty for her love. And One day she died. And she is thought to have reincarnated as a Parrot. A Guaca Maya! This Guaca Maya lives here with us and is thought to only like men and not women. So when I see her I always talk to her in my mind. I tried to preach love. To ask her blessings. I look at the Guaca Maya in her blue and red color. And I know she too has felt blue in both Portuguese and English. 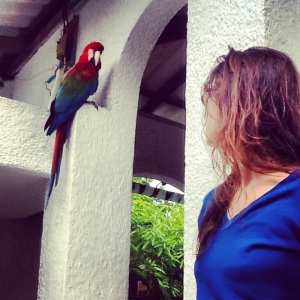 And as I am about to leave this country I carry with me love, art and stories. I am finally a celebration to humanity in its fullest and most beautiful version.  But as I learned about it there is sooo much more to this place. But I will only know better tomorrow after I once again go back up the mountains through the words and care of Nacho who has lived in this hotel when it was indigenous ground. Tomorrow I am taken to see the snowed peaks and the the mother of all waters. But of that I can only write later, when I have once again entered truly sacred land.