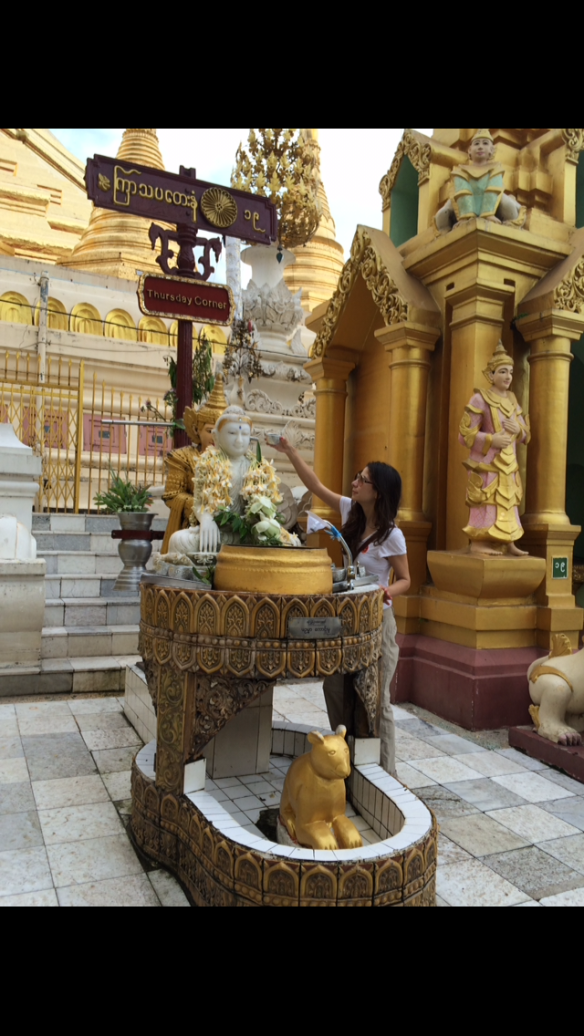 I am a bit out time 🙂 I slept profoundly at 5. And I woke up now at 10pm 🙂 And decided to write about the first day in English too.

I spent hours in the airport of Bangkok looking at the people in the airport that attends too many flights of air Aisia. I looked the vast majority of Asian passing by. They used all kinds of colourful clothes. They were very happy. And I kept wondering about where were they from. So I asked 🙂 I met Malaysians, Japanese, Chinese, Thai, Indians, Thais.

I met mr Smith better since I had not met him in the flight but I also had found out he was in the same hotel. I certainly had so much joy that I spoke to everybody in the immigration of Myanmar/ Burma.
I asked them how to say thank you. And I was told about many different views witch made me think it had to do the more than 100 different cultures here. In any case, they all helped me and for now we stayed with “Tchê Zu Bê”
Tomi, who is from Burma, was waiting for us in a white shirt and a Sarong. And thought I spoke to everybody I was still the first to be there. We had to wait for 4 people. I therefore asked about a thousand things.

The sarong is called for men Lang Ti and for women Lamei. There was loads of traffic and I was told there was a law that forbade for locals to ride a bike. There were still bikes in the streets and people walking with their colourful clothes in the street. Women and children had a powder in their faces.

I even asked about the music and so Tomi told me they heard hip hop and rock and when I asked about the local music he showed me on his phone a traditional song that really seemed the encounter of Thailand and India. There was a drumming and a lady singing.

Back to the hostel we met the lovely ladies who seem to be always overflown by joy and laughter. Their clothes are in many colours and always laugh.

Mr Smith invited me to go with him to the famous Swegadon pagoda. I have written how beyond belief amazing it was. And how lucky I was to have with me a Thai friend who told me about it. He told me to find the corner of my day, the day I had been born. I found it was a Thursday and I watered the Buddha, the sculpture behind him, the animal behind it.

I was very moved by it. He took of a picture of me doing it. I took pictures of him and I even made it for my grandmother and André.
This pagoda has so many details and it is so amazing that it is rather impossible to describe it. We visited the ones around it, I saw children give pop corn to fish. I saw ladies seating and praying. I saw men doing the same. We all had to take our shoes out.

When we reached the main Pagoda we climbed hundred of steps always being surrounded by shops of flowers, gifts, sculptures, Buddhist objects.
I even took picture of foreigners I saw there because they were couples and wanted to be together in front. How hard was that, since it is so hard to get the whole, or at least a part of the whole.

Architects , artists, engineers would be amazed by the intricacy of the construction. The ceilings, the walls, the stairs. It is so amazing that I lack words to explain it.

All I can say is that my arrival was blissful. I was in a the largest and most complex pagoda I have ever been. I was next to a Thai Buddist new friend who helped me a lot to understand. He was very discrete and knew so much. I am simply grateful.

I have one more day in Yangon and then I have decided I take a 12 hours bus to Bagan. Tomorrow I am still able to tell something but internet is rare.
I am very happy to be here. As I have learned
“TChê Zu Bê.”