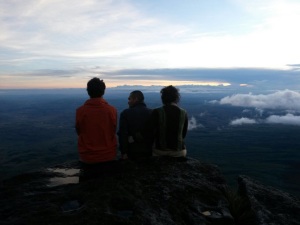 We are back from Monte Roraima. It took us 7 days and I could not even say we had the privilege to rest on the seventh day 🙂

Where should I start? Obviously by the fact that it was totally worth it, beautiful and surprisingly different than what we anticipated.

We had thousands of recommendations before arriving here in Venezuela. I had however always wanted to talk to Meru. Meru was the guide of my Argentinean friends Gonzalo e Carolina. It was hard to reach Meru. As we waited a couple of days we saw dozens of people coming back from Monte Roraima that looked and said were falling apart. They had loved it but they were exhausted. These dozens of people coming down Roraima had gone up during Carnival.

We were also approached by many agents with packages way more expensive than what Gonzalo and Carolina had paid. You have to bear in mind that the economy is collapsing so the inflations is high. So I imagined that was also why prices were so high. So I wanted to talk to Meru. When we finally did she was in Caracas and sent to us her brother, Josue.

Josue is a character on his own and that is why I will write this post in pieces.

We did not have an agent. We spoke to Josue who is part of one of the indigenous tribes of this area. We did not have sleeping bags nor a tent. It would all be provided by him. So since it was soooo much cheaper we decided to go the two of us with him. He would be our guide, and he would be in charge of it all. Food, tent, sleeping bag, and guiding us. We agreed since we knew little about it bur still wanted to go shopping for food with him.

That was a wise thing to do since we eliminated loads of non necessary and heavy things from our food.

And then came the day for our departure. He told us he would be here in our hotel at 7. Well, I guess this did not happen. Considering he insisted we should pay him the full amount before, by 10 we were worried.

We were actually happy about it because all this waiting was not wasted. We had a lecture about Venezuelan history and politics. It was taught to us by someone I cannot mention the name but was an economist from Caracas.

One of the best, and most unforgetable sentences he said and I wrote it down was:

“Cuba is a dictatorship. Venezuela is an authoritarian fascist military regime. And the worse part is that is has a social discourse.”

Maybe the most amazing thing of it all is that this very knowledgeable man who knew all about Brazilian politics, the history of Venezuela and Colombia and had never failed in giving dates for revolutions explained that in the beggining he had liked Chavez. As for Maduro he asserted he guesses not even his family might like him.

We were so entertained that the time flew and as Josue arrived we barely noticed what he said. Our driver was from Colombia and hated Chavez. He knew profoundly the ilegal practices around here. Going from mining, tourism and petrol smuggling.

An so we arrived to Josue’s community in Sao Francisco. It was a small village filled by indigenous modern houses.

And then we understood he had managed to reach two other people to come with us.

They were also Argentinians and I was amazed because I decided to ask by chance if they knew Gonzalo and Carolina. They did. They immediately became our friends.

Maria and Mauricio had been travelling in a motorhome for the past 2 years. They worked doing art-crafts and were surviving like that. They explained to us that it was way cheaper and more pleasant than living in Buenos Aires.

Immediately we all realised Josue could not possibly carry all this food plus tent alone. He believed he could. I said I would not carry anything but my bag. Josue always agreed to it all, what would happen after was always a mystery.

Maria and Mauricio were real mountaineers. And were also very skeptic about it all.

And we drove to our first camp site and to out enormous surprise though he added two people he still refused to getting a “porteador”. During the night, the four of us convinced him it was impossible. He needed to get someone else to carry food!

As we sat to sleep in our common space we realised that he might not exactly be that prepared at all.

He told us his dream was to become a singer and travel the world with his songs. That day he did not sing to us but told us that his artistic name was Eddy Frank, which is available on Facebook.

We still had no idea how it would be. All we knew was that we were in a great group. People were peaceful. Friendly and the mountain was empty. Carnival was over.

The first song we heard Josue sing was Hakuna Matata, una forma de ser. Our indigenous guide might have not known much about guiding but he loved the Lion King, Shrek and The simpsons.

We came back alive, happy, well, and laughing a lot.