I come from a very different world. I am from Brazil. I have been to both middle east and India. And I love both places. I travelled by myself every time and to be quite honest I was  never afraid of people.

Today someone sent me these photos asking for feminism in India. They are beautiful. All of them. But as I watched, and read I kept thinking we should not substitute  male chauvinism for feminism. We should walk the path of equality of rights, justice, and respect to all.

I stayed in the houses of people I met along the way. And because of that I have an unabated faith on humanity in general.  So much so that even now, after almost dying last year, I bought another ticket to travel on my own to the northeast and north of Brazil. It is true, that as a woman all men in busses would stare at me… But I would speak to them. They would get quite shocked in India, but eventually those who initially had been agressive protected me from something I never really knew what it was. I was never mistreated anywhere, nor have I stopped  going somewhere alone.

When it was Ramadan and I was in Kashmir I followed it, in Morocco no one asked me to do it and I followed it… in fact no one ever asked me to follow Ramadan because I am not a muslim. I did it anyway…or almost did it because in Morocco I drank water. Out of respect to the place where I was in I drank without anyone seeing. I veiled in mosques, and outside in the streets of Hebron, in Palestine also not because they asked me, simply because the women put it in my head and they thought i looked beautiful in a hijab.

Brazil, is another world. We walk half naked, we go in very small bikinis to the beach… and it is also not exactly a choice…. We are taught to do it. So many beautiful women go under non necessary plastic surgery for no other reason but to satisfy a society that values the body of a model.  Educated women fully believe they they choose to do that. But choice is such and intriguing thing…. How much do we actually consciously choose?

Do the indigenous who always walk naked dress now because they choose? Do they even keep these clothes on once non indigenous leave? Do they have higher rate of rape because people are naked?

How do we know what is choice? Do we like choice? The burden that comes with it?

Nowadays, I stop and I think… will a person be separated from society? Will they not get a job, a boyfriend/girlfriend, a wife/husband  a friend if they have not behaved in the way they believe they are choosing ( and is also the same way most people in that society is behaving). What happens then? Are they marginalised?  Are the answers to all of my questions about their social engagement is immediately NO?  Then we should know this is not a choice, It is a social practice, some way we were taught to behave  in that society, it is not really a choice. There is not really anything wrong to follow society. But we should know it is not a non-influenced choice.

I saw all pictures from this community called “The Logical Indian”. It is beautiful. But more importantly as I started in the beginning of this post  we should not exchange male chauvinism to feminism. We should fight for justice, respect and equal rights. So that people can evaluate really what it is that they are choosing.And finally, this is a path that should be walked not only in India but in the whole world.

But that in fact asks from all of us total responsibility….and I am not sure everybody  really wants that. 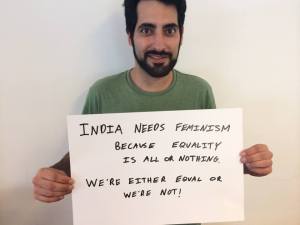