I don’t know how it happened but one day re-encounters have become way more important to  me  than encounters. Don’t get me wrong I still love encountering people, But now, I love reencountering them more.

About two years ago I met Chi. He had been travelling at that time for 1  year. He had left his native Taiwan to travel for 2 years the world. We met though couch surfing.  I organized a dinner celebration for Chinese new year for him 3 years ago. We hosted at the time.

When he arrived in our place he had crossed China overland, then Mongolia, Russia, entered Europe through Estonia went all the way down to Greece, traveled overland Eastern Europe to Western Europe and I had met him when he had reached England.

At the time I was doing my Phd at the LSE. He met my friends. He heard about about my research in the middle east.  My housemates. My ex-husband and I liked him so much that we convinced him to just stay with us all of his stay. He had such an interesting view on travelling. He who was from Taiwan and had traveled overland sleeping in a mattress thought the biggest difference in people was city versus villages.

Now, twp  years  later, he is still on the road… He has left home 3 years ago, after having worked 2,5 years to  save up. He used to feel he could only travel for two years. Now he feels he could still go on for 8 years on that money.

I wake up very early to meet him. He is tanner, has long hair now and had just been to Rio in Carnival. He is in Brasil he tells me for 3 things: carnival me, and the Amazon.

I love Chi. He is so unique. And so I take him to do the stuff I need. First of all… I take him to Kamal. I want to give my Coffee from Colombia. Kamal for those of you who read me is the guy from Siria.

We walked  from my house till we reach Avenida Paulista.  We talk about life. Where has he been. We no longer really care about how many countries, or borders. We care about people. So though I ask where he has been the following  years. I am most interested to know how was going to South Sudan to Sudan and then Egypt,  and then Israel, and then Turkey and then my most desired destinations ( together with  Burma), to Iran!!!

“The people in the middle east are too good. It is sad to see them be oppressed as they are.  Though I think the Arab spring was real chaos…. It is only spring for the news….South Sudan was the best introduction to Islam. People took their time for people. They visited each other every Friday. They are strong not because of the economy or the army. The people are strong because they care about each other. You know what it is funny… in every country they are afraid of the next. They are always afraid that something would happened once I crossed the border”

I know. What he talks about. So we get to Kamal. In the mall where there are so many Chinese immigrants. And when I bring my coffee Kamal is happy, he is moved. I tell him Chi is my friend. He has been travelling with a back pack for 3 years. Kamal is amazed. Kamal who came to Brasil  when he was 17. Kamal explains to people around Chi travels with backpack sleeps on a mattress,  has a pot to cook.  People are amazed. Chi asks me to ask him how was Brasil. 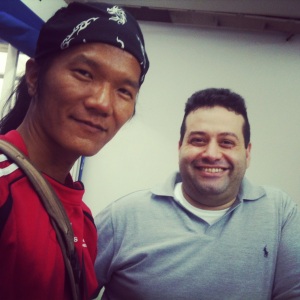 I tell Kamal to tell the truth. I don’t care. I want to know this.

“ I love this place. Brasil opens its arms,  hugs  and welcomes you.  I have been back to Siria 4 times. You know. My brother stayed. And I go there and I know he is a good person but I don’t know him. He has been now here for 3 months. But he has a stuck mentality. If you don’t agree with him, he stops talking. I look everything from above and  is ok to disagree. In the middle east it is different.”

I am impressed learning what he thinks. I tell Kamal that I brought him the coffee from the cooperative. I explain the whole story and he gets it.  Very soon there is coffee in front of  me. He is curious about Chi.  We all talk in mix languages. I tell him, I have to go, and he tells me I need to come more often. I promise to do so. I learn so much about Kamal today. I learn so much about Brasil.

And then I take the tube/metro to go to Liberadade, a Japanese neighbouhood. There is something I want to get there. We enter a shop and we are helped by an old looking like Japanese man. He is from Shanghai.  I introduced him to Chi, they speak Mandarin. The old man had lived in Brasil for 45 years. The lady who works with him is Brasilian but she tells me her children are fluent in Mandarin.

I am shocked. How come? Was she married to a Chinese man? Not the case. She explains to me the school around the corner teaches Chinese to children. Her children are 12  and they had learned since they were 2. The school receives Chinese children, mix children, but  Brazilian like her children as well.

“ I cant understand what they write.” And she smiles

She is happy.  Chi and I walk around talking about life, people, films, lao tse. It is just so good to reencounter someone you know. I find out some of the people  I met in Asia or in Palestine have hosted him. People from different continents that now know each other. It is so good to discover a bit more my own city with a foreigner. None of us care too much about the touristic things. I want to show him, what matters to me.

I want to take him to my little home as I am creating it. As we walk out of the Tube  I hear my name.  I look and I see Bruno who plays in CIdao every Monday. Bruno who last time I wrote played my favourite songs in my little carnival. Turns out he is almost my neighbor.

I feel happy. I have reencountered a dear friend who like me cares about people. And I can finally show him what my home is. Which means very soon I will take him to the  Casa do Nucleo, the project  of the Pianist Benjamin Taubkin… and tomorrow I will take him to see Cidao. Then I ll take him to climb.

He insists I must not get tired.  He is just here to see me.

He does  not need to see anything. And I explain I am so happy he is here. I am so happy I can show someone I deeply respect a bit of where I come from. Finally I can, and soon we will go with my godfather back to the  Centrakl Market.

I know where I come from, Benjamin was right it is where the new is possible, Kamal is right it is a place that welcomes you with whatever it is that you come with.

4 thoughts on “Re-Encounters – Around the World in Sao Paulo”