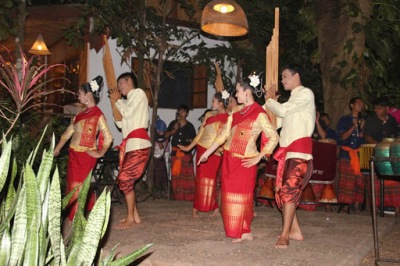 It is my first christmas outside of a country that celebrates christmas. Apart from the Thai ladies who work in 7/11 (which in Thailand is open 24 hours a day and seven days a week) and yesterday were wearing santa’s hat I did not see much around Nong Khai that reminded me of Christmas. It is true I did not look for it.

Mut Mee, the guesthouse, of course is different. It is international territory so we had a party. Although I advertised the party to everybody who I saw, I myself had no idea what we would do. Julian has been hosting those for years, and as promised in his posters around, that would be a Christmas party without carol singing, since we were in Thailand 🙂

I have never worked in Christmas before. But it felt great to rush the whole morning to help settle all of those who had escaped christmas in their own countries. It was incredible to see the ladies in the kitchen organise overnight a party for more than 80 people. It was special to be again with so many friends who had returned for that.

The garden was full when I came out. The buffet was perfect. Holding food for vegetarians and non vegetarians. No turkey. The main attraction was a Thai band and a Thai group of traditional dance. More specifically they were from Isaan.

I sat around watching the Thai dancers move their hands in total grace. I sat watching the changing of colourful Thai clothes, and listening to the music. Truly astonishing to be in christmas in Thailand I thought. I who never even cared for Christmas was having a great time.

After we were invited to join the Thai dance and a few brave of us attempted to imitate the grace of the Thai dancers. As the dance finished Julian announced that next I would play with Gaspard.

Gaspard and I had practiced a few hours the day before. I did not imagine at the time that so many people would be there. I did not practice that much. Gaspard is good enough to make my own songs seem nicer than they are.

And so it was that we went from Isaan traditional dance to my own songs, to then attempt an homage to the great Cesaria Evora and Buena Vista Social Club. I shook a little bit inside. I explained I was no musician. I would just play a few songs. And so I closed my eyes. I tried to connect inside with my own music. Outside were people from every continent. Every country. Some friends, some people I knew not. Next to me was the talented Gaspard who transforms anything into beautiful music. In front of me the sweet scandinavian and my german friends in full support. They just sat there. I closed my eyes and felt true joy.

As the night came to a close and I sat talking to Jate, ella’ s son, about Buddhism and people in the world I felt so happy. Our deep conversation was taken over by the fact that music restarted. The last survivors remained in the garden around one table singing. Every now and then I heard people saying ” this is the best Christmas i ever have. It was nothing about gifts, and presents, but simply enjoying time with people.” As the sweet Paulina exhaled saying that she would never forget this christmas I felt exactly the same way. Although I missed my family I felt I was pretty much at peace here.

I turn back to Jate, who works in Thai politics, and had been teaching me about asian history and asked him whether he was a nationalist.

” jules, there is no national. There is just people. We are all just human beings. Not that different you know?”

Yes I do. I could barely put it into words how much I know this in every cell of my body. As I sat around having spent the night with Thais, Indian, Chinese, Scandinavian, Europeans, Africans, Middle Easterners, people of the americas …and who knows from where else I thought… That we are definitely pretty much the same…

From a Buddhist country I wish you all a happy ritual of whatever ritual it is that you celebrate. A happy new year of whatever year that is important to you. But do celebrate it. And whenever you do, celebrate it with others. It does not really matter who they are. In ritual, it becomes pretty obvious, we are all very close.