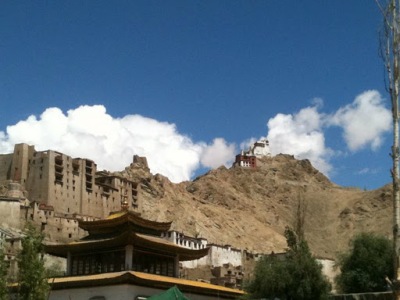 From the small touristic village of Leh you can always see around you
mountains, some are brown, some are spiked with snow. They surround
you in a strange way. They surround you but you do not feel captive,
instead you feel protected. From wherever you are in the village you
can see in the mountains the Gompa, the tStopa and the Palace. They
seat there powerfully making me feel in Tibet. They look like the
constructions I had seen in films or pictures of Llasa.

We were advised not to climb there in the first two days. We should
first acclimatise to the altitude. So during the first day we ventured
through the streets, the shops, and alleys. 2 out of our 3 German
friends decided to sleep. Olly who is 24 decided to follow us. A
Brazilian and a Israeli woman overwhelm anyone, but specially young
German boys. It took me the whole day to find out that Olli had never
flown out of Europe before. He had never left Germany, Austria and
Denmark. I could not even begin to imagine how it was for such a young
and sensitive boy to land from the saxon-scandinavian world in Delhi.
He did not want to waste a single second. He was dazzled, amazed by
all that, all that that even I having been in so many places am
overwhelmed by.

We all felt intermittently sick. Nothing too bad, just the occasional
reminder that we were used to more oxygen. Whenever these reminders
came i drank coffee, water, salt, and in my own invented potion i felt
better. So much better in fact that we decided to climb the mountain
the following day. I am no trekker, I have no experience in any of
this but I wanted to go. I am not very sure why. It was not that I
wanted to reach the Palace, I just went without much thinking about
it. And so the 5 of us: the three German Tobias, Paul and Olli, and
Liron (Israel) and I started our path. First through the city, than
through the alleys, than through the stairs, until we eventually
reached the palace inthe middle of the mountain. We climbed every
stair we looked at every single view. We were not really trying to
arrive anywhere we were just going and seeing. There was no one in a
hurry, no one who needed to arrive anywhere. We took every view, every
step, every breath. amd word with care.

Inside of the old palace, of old walls, and small doors, with almost
anything inside without any signs we naturally made our way to a
temple. I removed my shoes, went in and I sat in front of the Buddha.
I closed my eyes and had a short meditation. It was nothing dramatic
just a sense of emptiness. We climbed every stair till we reached the
roof. From there we saw the village, the mountain and there in the
distance all the way up in the mountain laid the white and red
constructions of the Gompa.

We went down, the Palace and started our walk towards the Gompa like
mountain goats. We went up in zig zag, climbing slowly the sandy,
arid, dried, rocky mountain. I breathed slowly, deeply, it was for me
a walking meditation, one step at the time, not really concerned with
arriving, I just walked. I walked in silence, as the lack of air and
the place naturally make you do so. One step at the time. It was in th
end not a difficult climb. We took our time. The time of within. So
when I reached thr big Buddha I did not even know I would encounter
inside of the temple I sat down and close my eyes. I meditated, I
prayed, I stood in silence. tears shed through my face. they were not
sad. They were not happy. It was just water.

And then we climbed even more and we sat under the nepali/tibetan
colourful flags. The sun was warm, the wind made them fly over us. I
took a few steps towards the edge of the mountain and alone I sat down
looking at it all. All I could say was thank you. I repeated the word
first in my mind, than slowly they started to come out of my mouth.
My vocal chords vibrated thankfulness. Looking at the mountain I could
not do anything but to repeat several times “thank you”. I felt so
much gratitude, and love, and joy. And i wanted to share it with the
world. I wanted to thank the hardship, the difficulties, that which i
did not want that made me have to keep going. I wanted to thank it
all. I thought of all people I love and it overwhelmed me to see how
lucky I am to love so many, to love so much. I felt gratitude for my
travelling companions. For their courage to leave the safety of
Germany, the world they know and suddenly also close their eyes and
meditate. We stood there, and every person we encountered became a
friend. They became someone we shared sometihng special with. We
laid on top of the mountain under the flags looking at the blue sunny
sky and we knew we were forever connected by this. And there I finally
understood that sometimes we need to take time, fight less, struggle
less trust in the path. 7 years ago I became very good friends with
Andrew, an English man who was studying religious studies in Holland.
As the total atheist that I was I condescendingly looked at him and
said “are u a believer?” He hesitated for a second then said ” I
guess I am a believer trapped in the body of an atheist” to what I
responded after short consideration ” I guess I am an atheist trapped
in the body of a believer”. Yesterday as I sat looking at those
mountains. As the air rarefied itself, as I thanked, and thanked and
thanked I finally freed the atheist from my body into the universe, I
realized that I do not want to have a “Ivan” relationship with the
world. In Dostoyevski terms I choose the relationship with the self of
Alyosha.