The rainy season is usually frowned upon by many prospective travellers to South-East Asia. Only now however, do i understand how great an enormous storm in the middle of the day can feel. The weather cools off, the stuffiness of the air disappears, and it feels like you’re starting anew. The storms themselves are just great. Rain pouring down, blasting thunders, lightning that seems to divide the sky into a million different pieces. unfortunately, however, even now during the rainy season these storms do not happen that often. In fact, this weekend the Hae Tian (a candle parade) is going to be celebrated. A Buddhist holiday marking the commencement of the rain’s retreat. That is why yesterday in class we spent half of the day practicing Thai traditional dancing. It was mayhem in school. Out of the 4 teachers there were only 2. One had missed school because of the funeral of her mother, while the other had a wedding of his son. So instead of teaching 2 classes we had 4. It was quite nice to see how caring Thai kids are. A couple of older kids took care of the kindergarden class, while Horn and i stayed with grade 1, 2, 5 and 6. 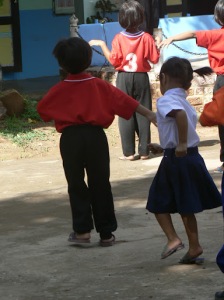 As it was sports day everbody was dressed in blue pants and red shirts. I realised this time that in the beginning of the day, apart from the little meditation and Buddhist prayer, they also sing the national anthem while the flag is being raised. The PE class was taught to the whole school by three 12-year-olds. It was basically some kind of dancing aerobics. In fact they are crazy about music. At some point during the day Horn made them all sing different songs. It was surreal, and i wish i had had my camera with me to record everything. Inside of a little classroom, with lots of echo, grade 1, 2, 5 and 6 were singing on the top of their lungs, drumming on everything that was around. Horn sometimes even conducted them so that one side of the class, grade 1 and 2, would compete against the other side of the class, to see who sang louder. I cannot describe how loud this was! All i could think of was about the very cranky teacher in the English primary school where i volunteered. Not allowing the children to sing loud. Here the kids had lots of fun. 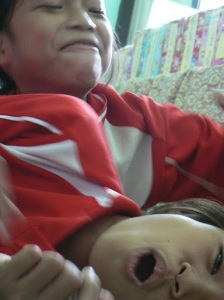 We also played games, and i was invited to play chess and checkers, and even a very modified version of monopoly where nobody ever gets too rich, and the bank is always paying you money whenever you stop at a place. When i had to pay 4000 Bhat and didn’t have it, a litle Thai girl paid it for me. When i had more money i paid her back, even though she didn’t want to accept it. Thai dancing was defintely the highlight of the day. Most kids sucked at it. But the few girls that were really good spent an enormous amount of time teaching me. The other highlight was when during lunch time the cook brought me two large turtles to show me what they were going to eat for lunch. I seriously almost fainted… My heart raced, and i felt the blood drain from my face, and i could not contain my shock. I obviously did not eat the turtle! As they all know by now i am ‘farang’ and ‘Te’ (vegetarian). 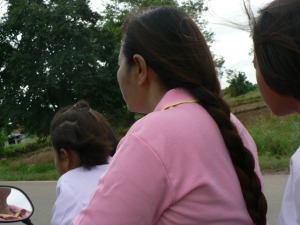 On the way back home (did i tell you guys we ride a little motorbike with sometimes 4 people on it) we had to stop by the teachers house to Way her dead mother. In a big room there was a very shiny coffin looking like a big box wrapped with golden paper. There were ‘Christmas’ lights all around it that twinkled the whole time. There were candles, flowers, insence, and i was taught how to Way the dead person. I knelt by the coffin, lit a big stick of insence, held it in my hand in a Way position, said a little prayer, put the insence stick in a pot full of other insence sticks, and bowed my head on a little cushion put there for that purpose. It was actually quite nice. As i wasn’t feeling entirely good at night i didn’t make it to the Thai wedding, which was a pitty. Today, there is going to be a Hae Tian ceremony in the temple here. And this weekend Horn is taking me to Ubon Ratchatani to watch the biggest Hae Tian ceremony on the whole world! I will let you guys know how that goes.